Besides a nasty hangover, a night of drinking can also cause you to wake up with a sore jaw or a dull headache.

The culprit is sleep bruxism (SB), a condition where you clench your jaw and grind your teeth at night. Sleep bruxism is pretty common, with about 8% of the population dealing with it regularly.

While bruxism can occur during the daytime, we’re going to focus on sleep bruxism for this article. That’s where you involuntarily grind and clench while you sleep, and it can have serious side effects. If left untreated, it will wear away at your enamel and eventually break your teeth.

You’ve come to the right place if you suspect that you’re dealing with SB – especially after nights of drinking.

Is there really a connection between drinking alcohol and teeth grinding? If there is, how can you stop it from happening to save your teeth? Read on to discover the answer to both questions.

What is Sleep Bruxism?

Your jaw consists of four masticatory muscles. They’re what allow you to chew food by moving the mandible at the temporomandibular joint.

Yet, sometimes the masticatory muscles activate during sleep, which causes clenching and grinding. In other words, you’re chewing imaginary food in your sleep.

Why do these muscles sometimes activate?

Experts aren’t entirely sure, but they suspect stress and anxiety are to blame. For example, increased tension in the jaw due to stress can cause clenching and grinding.

Other suspected culprits include:

Drugs such as cocaine and ecstasy or even Adderall

Certain types of medication, such as SSRIs

While the exact cause of SB is still a mystery, experts have identified habits that make it worse.

Do you frequently chew gum during the day? If so, that may cause sleep bruxism at night. Excessive chewing during the day gets your brain used to clenching your jaw – making it easier to happen at night.

In fact, chewing on anything for long periods is a sure-fire way to trigger SB. If you’re constantly nibbling on pencils, pens, and toothpicks, that could be why you wake up with a sore jaw.

If you’re a notorious coffee lover, eight or more cups a day can cause clenching and grinding. Excessive caffeine stimulates your brain and muscles during sleep, which can trigger SB. The same is true for smoking cigarettes, as the nicotine in tobacco has the same effect.

Now that you know what SB is and what causes it, what about alcohol? Is there really a correlation between drinking alcohol and teeth grinding?

The answer is a definite yes, and studies have proven it. This study found that the odds of experiencing SB shoot up 2x if you drink alcohol.

Out of all the habits studied, alcohol and cigarettes caused the highest uptake of SB in the participants.

A night of drinking can cause you to grind your teeth, especially if you’re already prone to SB.

There are a few hypotheses out there as far as why that is. For one, alcohol is notorious for interrupting sleep patterns.

According to the Sleep Foundation, drinking before bed reduces REM sleep and can cause insomnia. Alcohol will also alter the neurotransmitters in your brain – which can cause your muscles to hyperactivate – leading to SB.

Another hypothesis is that excessive dehydration from drinking can cause SB, too. Since your muscles aren’t hydrated, they will begin to spasm. That can not only cause teeth grinding but also trigger a lousy neck ache in the morning.

How to Prevent Sleep Bruxism

Okay, so you know that alcohol is terrible for triggering SB by now. Besides limiting your alcohol consumption, what else can you do to prevent episodes of SB?

The #1 way dentists fight back against bruxism is with a night guard. It’s a fitted mouthpiece made from soft materials that serve as a barrier between your teeth. If you start to clench and grind, the night guard will prevent any damage.

If you let your dentist know about your trouble with SB, they will help you get fitted with a custom night guard.

There is a strong correlation between drinking alcohol and teeth grinding. A night of drinking with friends may trigger an episode of SB, but a night guard will protect you. Beyond that, you’re best to avoid certain habits such as drinking alcohol, coffee, and using tobacco.

As long as you have a custom night guard by your side, you can still enjoy the things you like without worrying about damaging your teeth. 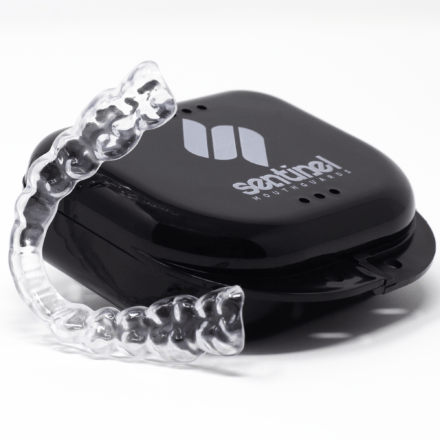